Having Fun with Morse, Getting Started with CW & Getting on HF Bands with Any License

The mode of Morse Code in Amateur Radio is commonly referred to as “continuous wave” or “CW”. (This name was chosen to distinguish it from the damped wave emissions from spark transmitters, not because the transmission is continuous.)

Morse Code, No Fun! Why?
Before 1990 all Amateur Radio licenses required at least some code and up until 2007 Code Proficiency was required to have most Voice HF radio privileges. It was something you had to do.
Many learned just enough to get their license but never used it on the air, they really just wanted voice privileges. Or worse yet, they got frustrated and lost interest in Amateur Radio. Now there is no code proficiency requirement for any level of Amateur Radio license.
Fun with Code- Maybe?
So the goal of this document is...

Fun with Code- Yes!
Morse Code could be Fun and Useful:

Many new hams are not aware of HF and 6-meter privileges that come with a Technician class license so let's take a look at them and what can be done with them:

Now before I go any further this is not an article on the pros and cons of CW as a licensing requirement, an argument on old versus new ways of doing things or of any type of operator shaming.

The remainder of this document will focus on getting you on the air using Morse Code:

Different people learn differently but here are a few ideas to get you off on the right foot. Do not learn to count dot (dits) or dashes (dahs) it will just slow you down. Learn at least 10 WPM (Words Per Minute) so you are hearing sounds of each character not counting elements (dots and dashes). One method of doing this is the Farnsworth Method. In the Farnsworth Method individual characters are sent at the target speed (CPM- Characters Per Minute), but extra space is sent between characters and words to slow the rate at which you have to translate (WPM- Words Per Minute).

Over the years there have been a number of methods used to teach code. Some of them involved a “live” instructor sending the practice code but many used recordings of sent code (phonographic records, tapes, CDs, etc.) one of the problems with these recorded methods was learner could soon memorize the code being sent as opposed to learning to receive it. Fortunately with the advent of computer software code practice can be generated on the fly.  So I suggest one of the following:

Once you pick a method or methods for learning one of the most important things is setting goals and a schedule of practice. Having a buddy to learn with can be a great incentive in this process. 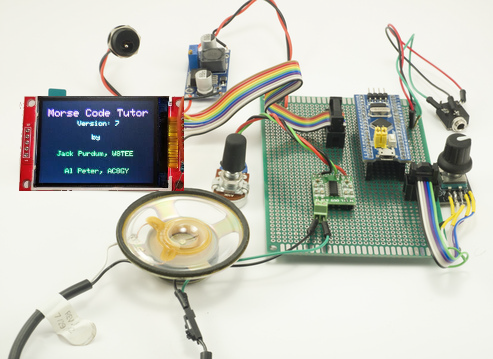 Sending CW- unlike the mechanical straight keys and Bug (semi-automatic mechanical keyer), both double and single paddles require an electronic keying device. These keyers come in a variety of styles. They translate the paddles movements in dits and dahs in both sound feedback and connection to key the radio.  Most recent HF radios have built-in Keyers although some users prefer external units for their extra features. Most have adjustable speeds, programmable memories and other features like Iambic Keying Mode that can be set to autocomplete letters. Here are two resources on Iambic/Squeeze Keying- “Squeeze Keying - Iambic Mode Operation” and “Iambic Keying - Debunking the Myth”.

Sending CW Via a Keyboard. Some Keyers have features and a port to use a PC Keyboard (PS2 and/or USB). A few radios have the ability to directly attach a keyboard to send CW (and even RTTY or PSK). Contesting software programs (N1MM, WriteLog, etc.) can send CW from computer keyboard by keying radio via a serial interface. Most contest programs allow “Macros” which can be programmed to send a series of CW exchanges during contest including signal reports, contest serial numbers, etc.). For additional information on Contesting Software visit www.k8zt.com/contesting.

Speaking of Contesting, contests are a great place for the beginner to start using CW. During a contest, the amount and variation of code to be copied are limited and uniform. In most cases you only need to copy:
You can use a Memory Keyer, Keyboard CW or Contest Software to send everything you need to exchange with the contest station.  Listen to the Podcast DitDit.com for an interview with me describing this entire process-
www.ditdit.fm/shows/episode-12-the-cw-ops-guide-to-contesting-101.

Morse Code Readers are not perfect and work best with:

Getting Better & Building Speed
There are a variety of ways to get better but the two that
stand out are more practice and getting on air as much as
possible to make contacts. Again a great way to practice
is with a buddy. In addition to on-air practice, there are
computer software programs and Apps:

There are a number of CW Groups and Clubs you might be
interested in joining for support, news, awards, etc.: